The FoT End of Season Ball will take place at the Hilton Northampton on Saturday 16th November. There are no League trophies to present this year but we will have Handicap League prizes, the October Double Up Month 200 Club Lottery Draw and a small number of other awards as well as a Fund Raising Auction. Details of the auction lots can be downloaded via the links below.

1. The Online Silent pre-bidding Auction will run from Friday 18th October and will close on Friday 15th November at 6pm. Following this, bidding for the item will continue during a live event auction at the Friends of Tournament Ball 2019.
2. The Auction lots can be found on the Tournament website: www.tournamentwaterskiing.org.uk
3. To make a bid on the pre-bidding Silent Auction you will need to email: tournamentski@gmail.com stating your name, the auction lot you are bidding for and the amount you would like to bid.
4. Bidders may bid as many times as they like for as many different lots as they choose.
5. All bids and subsequent payments are to be made in pounds sterling regardless of location of bidder.
6. Bidders must be aged 18 or over.
7. If you wish to check any information about a specific auction item – please do so before you bid by emailing tournamentski@gmail.com.
8. After making a bid, you will receive an email to confirm your bid.
9. Payment of winning bids may be via BACS. Winners will be sent an email confirmation. In this email there will be details of the FoT bank account for payment to. All Lots must be paid for in full by Friday 22nd November 2019.
10. Unless another date is specified, all Lots will expire 12 months from the finish of auction, unless agreement is made by bidder and donor, please see individual item descriptions for more information.
11. After payment has been received the winning bidder will be presented with the Lot or voucher for Lot or given contact details. The responsibility for making contact with the Lot donator lies with the bidder.
12. All portable items shall be, if possible collected in person. We will be in contact via email to discuss the best option for collection. Delivery or shipping may be available at an added cost to the bidder.
13. Any dispute during or after the event shall be dealt with at the auctioneers discretion and this decision shall be absolutely final. In no circumstances, whatsoever, will any liability attach to BWSW or Friends of Tournament or the organiser or the Auctioneer. Nor will any compensation be payable as of right to anyone attending or participating in the auction.
14. For the avoidance of doubt, the acceptance of a bid is not intended to create legal relations between either:
~ BWSW their employees, Friends of Tournament, representatives or agents; or
~ The donor; or
~ The bidder
15. BWSW and FoT make no warranty or representation of any kind about any items or services sold. Please inspect or make enquiries where possible.
16. The details of the Lots are correct to the best of our knowledge at the time of going to press.

All the Slalom Charts are now out of date with the change of the Shortening Speed for 45+ Women to 52kph.
Also the tolerance times for 37kph and 34kph were incorrect on the old charts. Not often that these speeds are used and with zero off times are mostly close to ideal anyway. The Jump Charts have been given a cosmetic improvement.
You can download the updated Slalom (2020 V1)and Jump Charts (2020 V1)here or in Resources. 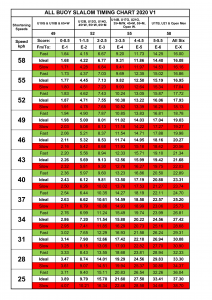 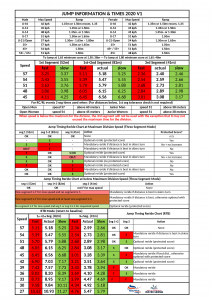 The World Tournament Council has changed it’s name to World Waterski Council to follow the rebranding of the IWWF disciplines.
At the August meeting of the Council at the World Open Championships in Malaysia a number of rule changes were agreed that will become effective during October.

The full minutes can be accessed on the link below but the main changes are:

A proposal is being developed to introduce additional age categories for 70+, 75+ 80+ and 85+ but these new divisions will not be used in the World Championships until a certain number of skiers are on the Ranking List for that event in that division.

The 45+ Women shortening speed is changed from 55kph to 52kph.

To qualify for an overall score a competitor must ski in all three events but in future no minimum score will be required for any event.

A new trick developed by Joel Poland has been approved. It is a Front Flip Five Front (FFL5F) worth 950 points.
Joel Poland’s New Trick

The tricks rope release rule has been changed. The rope measured from the inside of the attaching loop may not be longer than 1.00 metre and movement of the rope on the pylon is no longer prohibited or monitored.

The September draw of the Friends of Tournament 200 Club took place at the 37th Seaton Classic this weekend. John Battleday drew the balls out of the bag. There were 136 balls in the bag.. a new high. The video is incomplete and missed part of the draw but the winners were: 1st No. 92 Rob Spavin £510. 2nd No 190 Stuart Hills £340. 3rd No 126 Steve Glanfield £170. Congratulations to the winners. FoT has raised a total income so far of £85,200 and after prizes this has generated over £58,000. Of this £32,850 has been paid to support skiers travel to World and European Championships and £8,000 for various development activities with another £5,000 committed spend this year. Thank you to all our supporters.

The Friends of Tournament End of Season Ball will take place at the Hilton, Northampton on 16th November. This is an opportunity to spend a fun social evening with fellow waterskiers and to celebrate the end of another successful season. There will be some awards to make and prizes to be one as well as an auction to raise money for FoT. Live music will be provided by the Ian Campbell Band, Junction 24. The Ball is for all Waterskiers and their families whether recreational or competitive so why not get a Club group together and book a table.

Here is the July draw video of the Friends of Tournament 200 Club Lottery that took place today in Putrajaya, Malaysia at the World Open Championships. Mark Beard was assisted by the IWWF President Jose Antonio Perez Priego and our own Gill Hill, Secretary General of the IWWF. The prize fund this month with 129 balls in the bag was £967.50. Please watch the video to find out who this month’s lucky winners are. 🍀😊

The June draw took place at the Andy Mapple ProAm at Thorpe Lakes on Sunday. Unfortunately we did not catch the draw on video this time around so if anyone took any pics please can you send them to gvnkelly@aol.com. With a new high of 123 Balls in the Bag the prize money for the month was £922.50. Andy’s father Roy kindly drew the balls for us and the winners were:

Congratulations to the winners and many thanks to everyone who supports this initiative. We have now raised over £71,000 and after prizes this leaves £51,260 to support Tournament Waterskiing in the UK. Half the money raised goes to providing grants to our skiers for travel and training for World and European Championships and the other half is used for Development initiatives such as our successful series of Development Days.

With new participants that signed up over the weekend the July Draw will have at least 128 Balls in the Bag. We will get to the magic 200 with your support. Why not get your Club to buy a ticket?

The third Bulletin for the 35+ Championships in Ioaninna, Greece has been published and now includes the Provisional Schedule for the Competition. Download it here:

The 2019 Timing Charts have been tweaked a little bit and are available to download in Resources or below.
The 2019 V1 charts are perfectly OK to use so you don’t need to change them. 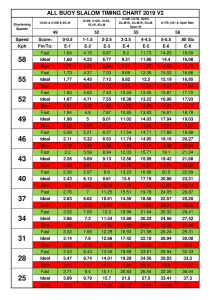